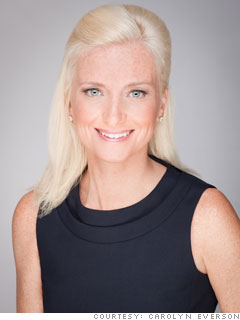 Half off pays in full for Groupon
Corporate vice president, global ad sales, Microsoft
Age: 38
Rank change: New
Industry: Technology
Microsoft spent a year vetting candidates for this newly created position before picking Everson to lead its aggressive push into advertising through media properties like Bing and Windows mobile. A seasoned media exec who was most recently executive vice president of U.S. ad sales for MTV Networks, she faces high expectations from CEO Steve Ballmer, who has said he wants advertising to account for 25% of Microsoft's revenue. For Everson, that means taking a $3.3 billion business to $15 billion.

Pets: Everson and her family have three dogs, a guinea pig, a rabbit, and four frogs.

NEXT: 40. Iain Tait - Tie
Last updated October 14 2010: 1:25 PM ET
40 under 40
Highest paid under 40
Which young executives at public companies brought home the most bacon this year? And exactly how much bacon are we talking about? More
Where is the economy heading?
This year's innovators offer their economic predictions for the next few years and beyond. More
Ones to watch
They may not have made the list this year, but we're keeping an eye on these rising stars. More