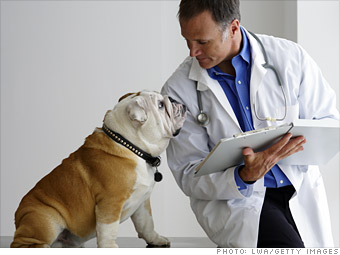 Our love for the dogs, cats, and fish in our lives truly knows no bounds. Pet care was one of the only sectors of the retail industry that grew during the recession.

According to the 2009-2010 National Pet Owners Survey, 62% of U.S. households owned at least one pet in 2008, accounting for approximately 71 million households. And the American Pet Products Association estimates that pet owners will spend almost $48 billion on their pets. Just under $24 billion of that will be spent on medicine and veterinary care, as more Americans than ever before open their wallets to spring for treatments for an ailing animal family member.

It's no surprise, then, that veterinarians are listed as one of the fastest growing professions in the U.S. -- the number of vets is expected to expand by 36% between 2008 and 2018.