Nokia: Still on top, but for how long? 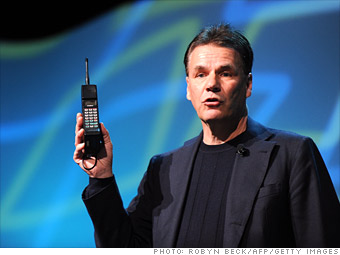 The Finnish giant can still claim the world's largest share of mobile phone sales, with close to 40% of the market. But Nokia (NOK) is still trying to figure out how to best compete in a world of iPhones and Droids.

"They're still globally number one, but a lot of that is driven by sales in emerging markets. There's not much more share they can gain," says Soumen Ganguly, a principal at consulting firm Altman Vilandrie & Company.

While Nokia has their closest competitors beat by very large margins when it comes to sales, their designs look dated, allowing competitors like Apple (AAPL), HTC, and Motorola (MOT) to make compelling cases for consumers to switch to their phones.

"Nokia is steadfastly devoted to their handset DNA. That doesn't take into account the emerging trends," says IDC's Llamas.

For years, the company has used Symbian as its smart phone operating system of choice. But the introduction of the iPhone in 2007 gave consumers a taste of how much software can make a difference when it comes to their phones.

"Apple just totally blindsided them. They didn't get it. They weren't software people. They left you with a clunky user interface," says Ken Dulaney, vice president and distinguished analyst at Gartner Research

Nokia recently announced that, going forward, its high-end N-series smart phones will be powered by a Linux-based operating system called MeeGo, a joint effort by Intel and Nokia that aims to give Nokia the software that it should have had three years ago in preparation to battle the iPhone.

Nokia faces a major challenge in that it will need to entice developers to create apps for MeeGo. Apple and Android (GOOG) have both reached a phase beyond simply focusing on the number of available apps at their stores, leaving Nokia at a significant disadvantage.