Several players had the chance to be the Apple of cell phones, before Apple. How did they lose the signal?

Which mobile players are about to be left behind? 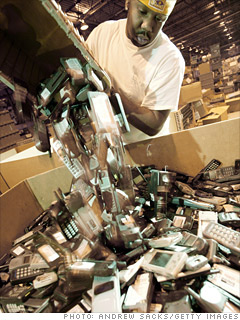 With Apple's (AAPL) iPhone 4 launch-a-palooza, the HTC Droid Incredible back ordered across the country, and the release of Droid X, Motorola's (MOT) latest Android powerhouse, just over a week away, 2010 is shaping up to be the smart phone's Summer of Love.

The worldwide smart phone market grew by over 56% between the first quarter of 2009 and 2010, double the growth of the overall mobile phone market, according to the research firm IDC.

Smart phones are making up a larger portion of the mobile phone market every year, slowly displacing traditional mobiles, particularly in the U.S. and Europe. Smart phones went from making up just 3% of all phones shipped worldwide in 2004 to 15% in 2009, according to Ramon T. Llamas, a senior analyst at IDC.

But the pre-order meltdowns, waiting lists, crack-of-dawn fan boy lines, and record-breaking sales make it easy to overlook the fact that several mobile phone companies risk being left behind if they don't get their smart phone act together fast.

Nokia (NOK), Research in Motion (RIMM), Apple, HTC, and Motorola products make up over 80% of the worldwide smart phone market, according to data published by the IDC. The remaining 20% is made up of a cadre of small regional players, which number 40 today but is growing steadily, heating up an already hot market.

In all the excitement it's easy to forget those big name brands weren't always on top and could, with a few missteps, easily find themselves going from top of the heap to bottom of the barrel. Case in point: the first on our list of companies that have failed to seize the day is one that seems on the way down.

By Scott Olster, associate editor
NEXT: Nokia: Still on top, but for how long?
Last updated July 09 2010: 6:21 PM ET
More
• Motorola to Charm the pants off of Blackberry users?
• The new kings of apps
• Will iPhone 4's woes help Android?
More Galleries