It may be tougher for energy companies to produce crude, but that isn't because we've hit peak oil. The world is still rich with the resource, the problem is how to access it. 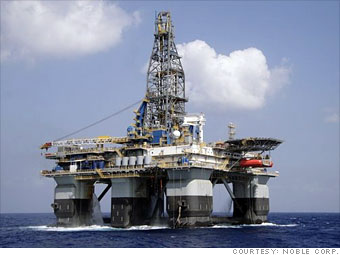 Alarms about peak oil are still sounding in certain circles, but the world, for now, is still awash in petroleum.

There are many oil reserves around the globe that remain untapped, and explorers continue to discover new fields deep beneath the earth's surface. Depending on how the controversy surrounding the Arctic National Wildlife Refuge turns out, the U.S. could exploit oil reserves in the area, despite potentially grave environmental consequences. And to the North, Canada's tar sands are one of the largest oil reserves yet to be produced, holding the majority of the country's 178 billion barrels of oil resources.

Elsewhere there are even more reserves, but they're often in places that are either geologically or politically difficult to access. Some of them come with dangerous security risks to drilling.

Indeed, the oil squeeze has everything to do with access, and very little to do with the sheer volume of untapped oil left in the earth.
By Shelley DuBois, reporter
NEXT: Mexico
Last updated January 26 2011: 12:08 PM ET
More from Fortune.com
BP: 'An accident waiting to happen'/
So how did Tony Hayward come to preside over one of the worst industrial disasters in history? A Fortune investigation reveals a saga of hubris, ambition, and a safety philosophy that focused too much on spilled coffee and not enough on drilling disasters. More
A visit with BP's new CEO
In Bob Dudley, the oil giant has found a chief executive who is dramatically different from his predecessor. That, it seems, is exactly what the company had in mind. More
America's secret commodities crunch
Something's gotta give: As commodity costs climb, who will pay the price? More