The scale of Japan's tragedy is still difficult to assess but there are several industries that are particularly vulnerable, and the impact on them could be felt around the globe. 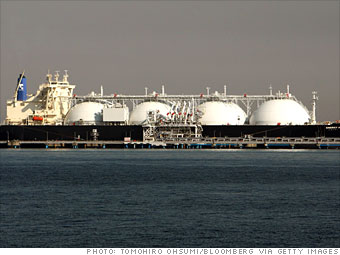 Unlike many of the world's commodities, the price of natural gas has been one of the few that has actually declined this past year.

But perhaps not for long. The production of nuclear power, which accounts for about 30% of Japan's electricity, has stalled as workers try to avert a nuclear disaster following last week's earthquake.

The power disruptions have helped send natural gas futures rallying on speculation that liquefied natural gas cargoes would be diverted to Japan.

On Tuesday, natural gas futures rallied for a third day, gaining 1.2% in the New York Mercantile Exchange to $3.959 a million British thermal units. Despite the recent rise, gas is still down 11% this year.

By Nin-Hai Tseng, writer-reporter
NEXT: Auto industry
Last updated March 15 2011: 1:31 PM ET
More from Fortune.com
Tokyo in mourning
Japan's capital was relatively untouched by the earthquake and tsunami, but the usually bustling city is quiet as the country copes with the economic and human toll. More
Don't bank on a Japanese debt crisis yet
As Japan reels in the aftermath of the most powerful earthquake in its history and worries grow about a nuclear reactor meltdown, some economists wonder whether the disaster will push the country closer to a sovereign debt crisis, too. More
In Japan, fending off the unthinkable
In Tokyo, stocks tanked and stores were emptied of necessities while workers for Tokyo Electric Power Co. desperately try to prevent a nuclear meltdown. More