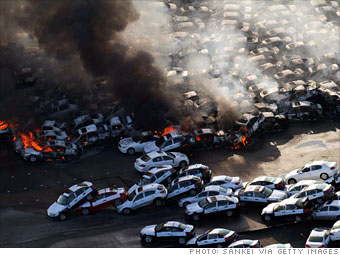 Cars waiting for export burn after an 8.9 magnitude strong earthquake on March 12, 2011 in Tokai, Ibaraki, Japan.
As the world's third-largest producer of automobiles, Japan could expect major headwinds as the natural disasters disrupt production of vehicles sold across the world.

As Fortune's Alex Taylor notes, Japan's largest auto producers are now expected to remain shut down through Wednesday, and some analysts foresee further disruptions lasting months. He also points out that U.S. car buyers will be feeling the effects of the disaster in coming weeks -- Deutsche Bank estimates that about 12% of all vehicles sold in North America come from Japan and that vehicles produced in the region by Japanese automakers contain at least some Japanese-made component.

The next five months are the seasonally strongest of the year for U.S. sales, so extended disruptions could cause shortages of some products.

NEXT: Semiconductor industry
Last updated March 15 2011: 1:31 PM ET
More from Fortune.com
Tokyo in mourning
Japan's capital was relatively untouched by the earthquake and tsunami, but the usually bustling city is quiet as the country copes with the economic and human toll. More
Don't bank on a Japanese debt crisis yet
As Japan reels in the aftermath of the most powerful earthquake in its history and worries grow about a nuclear reactor meltdown, some economists wonder whether the disaster will push the country closer to a sovereign debt crisis, too. More
In Japan, fending off the unthinkable
In Tokyo, stocks tanked and stores were emptied of necessities while workers for Tokyo Electric Power Co. desperately try to prevent a nuclear meltdown. More