10 places where housing is soaring

The U.S. real estate market might still be a mess, but in other parts of the world home prices are getting downright frothy. These countries saw the greatest jump in housing prices during the past year. 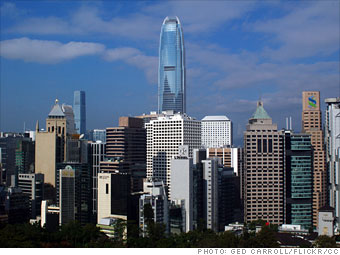 Annual increase: 20.1%
Uber-rich Mainland Chinese business owners have been flocking to Hong Kong, and it's not just because it's the world's business and trade center. It also has some of the world's most sought-after real estate.

While demand is relatively high, supply is tight, given that this densely populated region spans only about 426 square miles. That explains why prices have risen faster than other country in the world in the past year. It also helps that borrowing costs to pay for these super-expensive homes is at record lows. Since December 2008, the base interest rate has hovered at a two-decade low of 0.5%.

But Hong Kong's government has been trying to quiet the real estate party, as part of its ongoing effort to fight inflation. In November, officials took its toughest steps by imposing an additional transaction fee of up to 15% on properties that are resold within two years. They have also required higher down payments for high-end home purchases.

By Nin-Hai Tseng, writer-reporter
NEXT: Latvia
Last updated April 28 2011: 12:31 PM ET
More from Fortune.com
Follow Canada? Only at your own risk
Canada has been held up as a picture-perfect economic example, but once rates start to rise, things could get ugly fast for our northern neighbors. More
The 10 best cities for home buyers
You better believe it -- the real estate market is back. It's time to buy again, and here are the 10 cities with the most affordable homes, according to a new report from Deutsche Bank. More
Why I'm not buying Zillow
I'm all for rationalization of the ridiculously complex real estate transaction process. But Zillow hasn't provided the answer. More