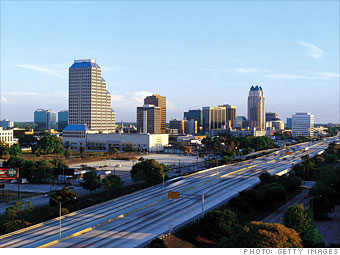 • Real estate: It's time to buy again
Rent as % of after tax mortgage payment: 137.2%
Median home price change, 2006-2010: -51.3%
Orlando's mayor, Buddy Dyer, has said that the delay of a new rail project that was to connect Orlando and Tampa has been a bigger blow to the already-suffering economy than many realize.

But there are some bright spots in central Florida. Following the housing market slump in Orlando during the past few years, buyers can now take advantage of bottom-level interest rates and low prices for ownership. According to a Florida Realtors report cited by the Orlando Sentinel, the home of the Magic saw a larger price decline during the past 12 months than any of Florida's other metro areas.

In addition, local papers have all reported a return in tourism, at last.

NEXT: Rochester, NY
Last updated March 29 2011: 9:31 AM ET
More from Fortune.com
A bright spot in housing's bad market: Rentals
Housing bear David Rosenberg says that apartment REITs should continue their streak for the foreseeable future. More
Five popular tax breaks on the brink of extinction
From energy savings to college costs, Americans are getting a lot of breaks from Uncle Sam during this tax season. But get them while they last -- the good times are about to end. More
How cheap houses spell bad news
Houses look more affordable than ever. But prices will have to fall further before many Americans can actually afford to buy one. More