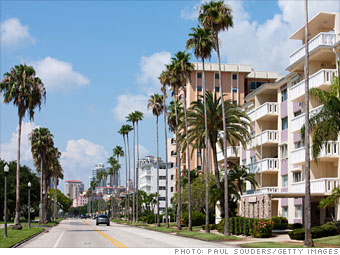 • Real estate: It's time to buy again
Rent as % of after tax mortgage payment: 131.6%
Median home price change, 2006-2010: -41.4%
Florida learned the hard way that if you build it, they won't necessarily come. It was one of the most overbuilt states during the housing boom, and large subdivisions there still remain vacant or partially constructed.

But boomers are starting to retire, and Florida will always be a desirable destination for the golden years, so that inventory won't sit empty for long. In the Tampa-St. Petersburg area, home prices plummeted so much that it's now much more affordable to own than it is to rent. Government agencies and developers have worked together to promote downtown Tampa Bay to residential buyers, and a number of large projects are underway to attract new buyers.

While it's made progress, it still has a long way to go. The metropolitan area ranks ninth in the nation in foreclosures.

NEXT: Las Vegas
Last updated March 29 2011: 9:31 AM ET
More from Fortune.com
A bright spot in housing's bad market: Rentals
Housing bear David Rosenberg says that apartment REITs should continue their streak for the foreseeable future. More
Five popular tax breaks on the brink of extinction
From energy savings to college costs, Americans are getting a lot of breaks from Uncle Sam during this tax season. But get them while they last -- the good times are about to end. More
How cheap houses spell bad news
Houses look more affordable than ever. But prices will have to fall further before many Americans can actually afford to buy one. More