Fastest growing cities in the South 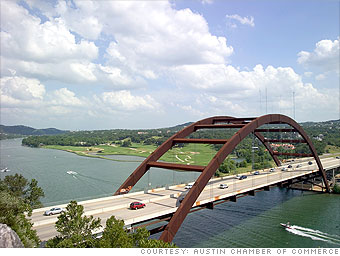 Total Population: 1,716,289
Change From 2000: 37.3%
Last year, Texas tied with California as the states home to the most Fortune 500 companies -- the Lone Star state boasts 57 company headquarters ranging from RadioShack to Continental Airlines. And it's not surprising -- Texas is one of just a few states in the nation that has no corporate income tax.

Though the Dallas Fort-Worth and Houston areas are much larger, Austin has its own draws, including a lower-than-average cost of living when compared to all cities nationwide. In addition to being home to large companies like Dell and Whole Foods Market, the Austin area is notable for its genius in nurturing the "power of small," according to Kiplinger's, which named it the best city for small businesses in 2010. And Business Journals named Austin the number one city for small business vitality for two years in a row.

NEXT: Charlotte-Gastonia-Rock Hill, NC-SC
Last updated April 14 2011: 10:33 AM ET
More from Fortune.com
The 10 best cities for home buyers
You better believe it -- the real estate market is back. It's time to buy again, and here are the 10 cities with the most affordable homes, according to a new report from Deutsche Bank. More
America's most stubborn home sellers
Homeowners in certain cities are more likely to quickly reduce their price than others. And where are the sellers most resistant to price reductions? New York City, of course. More
Foreclosure fraud: The homeowner nightmares continue
Reading between the lines of settlement proposals, the states attorneys general aren't speaking the same language as the big banks. And struggling homeowners are paying the price. More