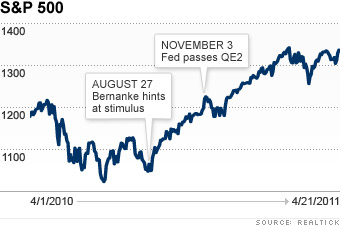 "I do think that our policies have contributed to a stronger stock market," Bernanke said in January.

But while a stock rally is a good sign for the economy, the benefits haven't exactly trickled down to Main Street. Jobs and housing are still in the doldrums.

NEXT: The job market

Bernanke and Greenspan aren't the only ones to have put their foot in their mouth over the years. Here's a look at Federal Reserve 'oops' moments. More