Can I help you? On Twitter, the answer is no. 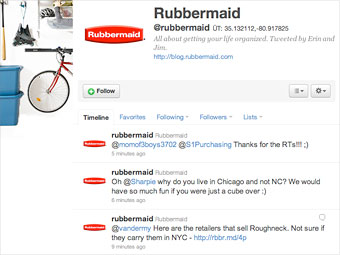 Objective: Locate Roughneck Storage Box in New York City.
Twitter: Tweeted @rubbermaid, which responded with a link to stores that carry the roughneck storage box.
Time: 7 minutes
Problem solved? Yes
Phone: Didn't take long to reach a real person, who told me I could find the Roughneck Storage Box at Lowe's, Home Depot, K-Mart, Wal-Mart, Target and the Container Store, but not Bed Bath and Beyond.
Time: Less than 3 minutes
Problem solved? Yes
Website: At 10:46 a.m. I sent a message asking where I could buy a Roughneck Storage Box in New York. I still haven't received a reply.
Time: Indefinite
Problem solved? Definitely not
Verdict: The information I got over the phone wasn't entirely accurate. Lowe's does not sell the box, according to the company's website, and neither does Target or the Container Store. But though Twitter was more accurate, the customer service hotline was slightly faster and arguably more thorough.

NEXT: Hyatt
Last updated February 11 2011: 3:21 PM ET
More from Fortune.com
Conan 2.0
How a late-night Luddite accidentally fought his way back into bedrooms (and computers, smartphones, and tablets) across America. More
Twitter investor nears final close on big new fund
Insight Venture Partners recently told the SEC that it had closed on approximately $1.05 billion for its seventh fund. More
Why a tiny iPhone could be a big deal
Has Apple built a smaller, cheaper smartphone that is carrier independent? More