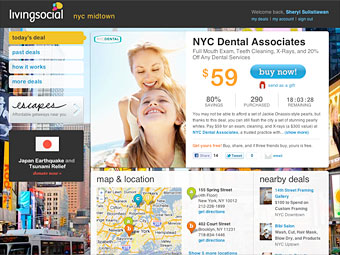 Once considered a distant second to Groupon since it was founded by Tim O'Shaughnessy in 2007, last year marked the emergence of LivingSocial as a serious competitor thanks to a $175 million investment from Amazon in December. The site offers deals similar to Groupon but made a big splash when it sold 1.3 million $20 Amazon gift cards for half price and shortly followed up with sales of more than 730,000 discounted Fandango movie tickets.

So it's not surprising that Living Social is hungry for expansion. With expected revenues of $500 million for this fiscal year, it's reportedly seeking another round of funding, this time in the ballpark of $500 million and plans to add 150 employees per month moving forward.