Being the biggest daily deals site in the U.S. today means the inevitable onslaught of copycats, including Facebook's expanded Deals offerings. From LivingSocial to Yipit, a roundup of some of the most notable daily deal sites out there, proving that imitation remains the best form of flattery. 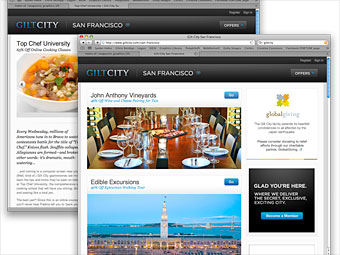 Available in seven markets including New York, San Francisco, and Tokyo, GiltCity launched last spring as an extension of Gilt's already popular flash sales. But while Gilt proper focuses exclusively on designer clothes and accessories, GiltCity emphasizes discounts on higher-end local experiences: half-off "boozy" brunches, Spanish lessons, and facial fillers, for instance. Unlike Groupon, whose sales are 24 hour-based affairs, GiltCity's can go on for days -- as long as a week -- and don't require a minimum number of potential buyers for the deal to actually go through.

Falling under the Gilt Groupe umbrella also means it benefits from the company's rapid rise. Expected to make $500 million in sales this fiscal year, Gilt is reportedly raising between $80 million and $100 million from investors at a likely valuation of around $1 billion and its CEO, Kevin Ryan, is contemplating an initial public offering (IPO) for 2012.