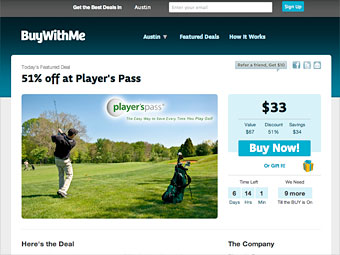 This me-too site started in Boston in 2009 and picked up some steam when it secured a $21.5 million during two rounds of funding last year from Matrix Partners and Bain Capital Ventures. (Up until then, the site had been privately funded by friends and family.) It uses a similar model to Groupon and Living Social, but its deals run as long as a week. And while it can't claim the sheer userbase of its big brothers yet, BuyWithMe does have some visibility -- it currently provides the deals on the news site Boston.com, owned by The New York Times Company.