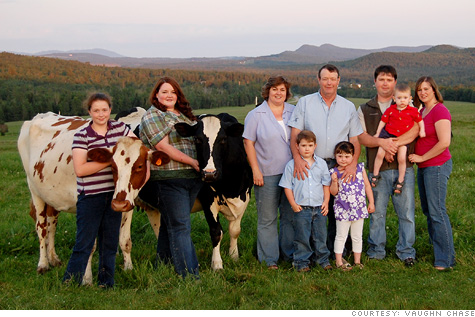 NEW YORK (CNNMoney.com) -- When organic dairy farmer Vaughn Chase received a letter informing him that processor H. P. Hood would no longer be taking his milk, he feared he'd be forced out of business.

Three years earlier, he had invested $25,000 in converting his 600-acre family farm to meet the U.S. Department of Agriculture's organic certification standards. But now he couldn't find another organic processor willing to take the milk from his remote farm in Maine. With the price of non-organic milk plummeting below production costs, returning to conventional farming wasn't an option either.

"That was suicide," says Vaughn, 54, who owns about 60 milking cows. "I couldn't put my family through that. I might as well quit."

Vaughn's was one of 10 small farms in Maine let go by H. P. Hood last year; luckily, none had to quit. With help from the Maine Department of Agriculture, local non-governmental farming organizations and a business consultant, Vaughn and the other farmers created a company to process and distribute their milk locally under their own brand, Maine's Own Organic Milk Company -- MOOMilk.

But the most unusual aspect of the venture is its legal status. MOOMilk is a "low-profit" limited liability corporation, or L3C. It's a controversial new type of business entity intended to make it easier for companies with a social mission to receive investments, including loans and grants, from charitable foundations.

Since April 2008, five states and two Indian tribes have signed legislation enabling companies to incorporate as an L3C, which is generally defined as a taxable for-profit business whose primary goal is to achieve a stated social mission. Profit is a secondary goal.

At least five other states are currently considering similar legislation, and L3C proponents, including the Council on Foundations, are courting potential sponsors on Capitol Hill for a federal bill. In Vermont, the first state to pass the legislation, more than 80 companies have incorporated as L3Cs in the past 21 months.

"We're trying to create an LLC whose very DNA insists that it has to put its beneficial activities in front of making money," says Robert Lang, one of the original architects of the L3C concept.

Lang, a former cosmetics business owner in Granite Springs, N.Y., came up with the idea soon after he was asked to run his late stepfather's small family foundation. He learned about "program-related investments" (PRIs), which are loans or investments private foundations can offer for charitable or educational projects, such as affordable housing or health clinics, even if they are run by for-profit entities.

Lang saw value in PRIs because they let foundations recoup their outlays, allowing the same money to be recycled and loaned out multiple times. But few foundations are willing to make such investments: The New York-based Foundation Center estimates that PRIs made up less than 1% of the charitable distributions made by foundations in 2006 and 2007.

That's because PRIs can be complicated and potentially risky. When a foundation files its taxes, the IRS can refuse to recognize a PRI if it doesn't deem the project adequately charitable. That leaves the foundation vulnerable to hefty fines. The only way to be sure that an investment will be approved is to seek a private ruling from the IRS in advance -- an expensive and time-consuming process.

Lang believes that L3Cs could change all of that. He envisions the business structure as a pre-approved mechanism for PRI investments. With the help of advisers including Marcus Owens, a Washington tax attorney and former director of the IRS Exempt Organizations Division, Lang says he has spent $200,000 of his family foundation's money to draft the legislation and lobby state legislatures.

As for-profit entities, L3Cs are also eligible for regular investments -- a factor that made the unusual business entity particularly attractive to the creators of MOOMilk, which was incorporated in Vermont (Maine has not passed L3C legislation). They hope their venture will attract capital from social funds as well as foundations. The company's operating agreement specifies that the farmers receive 90% of the profits each month, as well as a predetermined price for their milk. Investors only receive their return upon exiting the company.

"Instead of building equity for the middle guy, we're using the low-profit model to keep profits going to the farmers," says Paul Dillon, an attorney in Corinth, Maine, who worked on structuring MOOMilk. "Nobody's going to get rich investing in this L3C. But if the goal is to save family farms, that is going to happen."

But while MOOMilk may be a worthy use of the L3C designation, some in the nonprofit sector are concerned that this hybrid model provides access to nonprofit funding with too few restrictions.

In March, the National Associations of State Charity Officials -- a network of state offices charged with overseeing charitable organizations -- sent a letter to Senator Max Baucus, chairman of the Senate Finance Committee, highlighting a long list of questions they had about L3Cs.

The group wants to know "how L3Cs will be monitored to make sure that the profit purpose remains secondary to the charitable purpose," says Elizabeth Grant, an assistant attorney general in the Oregon Department of Justice.

It's also waiting for the IRS to decide if it will recognize L3Cs as automatically eligible for program-related investments. If it won't, then the L3C designation may be redundant.

While Lang insists that the state laws have been written to dovetail with IRS regulations on PRIs, some organizations are wary of jumping on the L3C bandwagon too soon.

"The unanswered questions about L3Cs are troublesome to some foundations," he says. "The state laws seem well-designed to spur social entrepreneurship, and yet there's this waiting period because IRS permission on this is completely unknown. I think that for both the entrepreneurs and the would-be givers, there's a holding pattern right now."

Why doing good is good for business