ESOP plans let founders cash out and employees cash in 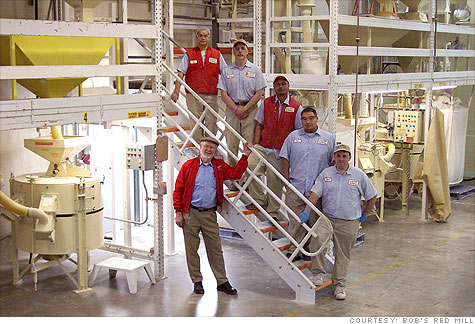 (CNNMoney.com) -- On his 81st birthday, entrepreneur Bob Moore signed the papers to hand nearly a third of his company over to his 200 employees. But it's a gift Moore and his three partners hope will pay off for them as well: By launching an employee stock ownership plan, they're creating an exit strategy for themselves from the business they've spent the past three decades building.

"We're growing old," says Moore, who launched Bob's Red Mill Natural Foods in 1978 in Milwaukie, Oregon. "We started wondering, 'What are we going to do with this company?' We could position it to sell it, but we just felt that the people in this company deserve to have it. They have made it what it is."

An ESOP allows a company to gradually buy out its existing owners. Typically, the company makes tax-deductible contributions to a trust set up to facilitate the employee stock-ownership plan. The trust then uses that money to buy stock from the current owners, explains Kyle Coltman, the managing director of SES Advisors, which has designed and implemented more than 500 ESOPs. The stock price is determined by an independent business appraiser hired by the ESOP trustee.

Of course, funneling company cash to the trust reduces the annual profit left over for the current owners. A company setting up an ESOP typically takes a financial hit to do it.

But when a company's ownership is concentrated in the hands of just a few, the move can be surprisingly beneficial at tax time. "If [an owner] takes the profits directly from the company, he will pay ordinary income taxes on the payment," Coltman says. But when profits instead go into an ESOP, which uses them to buy the owner's shares from him, the transaction instead becomes a capital gain. That means it's subject to a lower tax rate than ordinary income.

The Bob's Red Mill ESOP offered Moore and his partners a lucrative exit strategy, but it also left behind a company full of owners who will continue to build the business Moore loves. A new study from Georgetown University shows that in the recent recession, ESOP firms' revenue grew an average of 15.1%, compared to a decline of 3.4% for all private-industry revenue. ESOP firms also showed employment growth, faster wage growth and higher average wages during 2008, compared to drop-offs in all of those metrics at other firms.

"These results tell us what workers in ESOP companies already know," says Mark Lewis, president of employee-owned Woodfold, Inc., and chairman of industry trade group Employee-Owned S Corporations of America. "When times are tough, employee-owners work smarter and harder because of their commitment and investment in the business. This makes us stronger."

Why form an ESOP?

For business owners like Moore, an ESOP can offer a number of benefits. For starters, it can create retirement income.

"There is a difference between selling all of your company and a portion of it," says Lance Hall, president of FMV Opinions, a valuation and financial advisory services firm. "An ESOP is the best tool for selling a minority interest in your company. By selling a portion of her company, the entrepreneur can invest in other assets, providing much-needed wealth diversification."

But launching an ESOP isn't just about benefiting the business owner. Most owners willing to go to the trouble of implementing such a plan have the interests of their employees and the business in mind.

Josh Hinerfeld, founder of 28-year-old produce wholesaler Organically Grown Company, started an ESOP last year to "make sure that all long-term employees have the opportunity to retire with some measure of financial security," he says. "This won't happen just through 401(k) savings and company matches. I think they need to have the opportunity to share in the wealth generation, and risk, of the company."

And making owners out of employees can be a business-building strategy.

"The company is put in a position of being able to survive and thrive in the future, so that our employees' jobs are secure and our customers continue to get the great pizza they've come to love," says Barbara Gabel, co-founder of Zachary's Chicago Pizza, which opened an ESOP seven years ago and now has sold 75% of the company to it. "Our community has a great affinity for the mom-and-pop small businesses, and they love it that a company they respect is employee owned. It enhances our hard-earned goodwill."

For ESOP companies, all the benefits of the plan have to outweigh the hassles of implementing and maintaining it. Most work with an array of ESOP specialists, valuation experts and attorneys to determine whether a stock ownership plan is feasible and then to create one. The process can be daunting.

"Once you've begun the ESOP, everything is more complicated: company financial reports, and financial decisions," Gabel says. "Every year your company has to go through an intensive valuation to determine a current stock price. You need to educate your employee-owners about the ESOP. Because the ESOP is complicated, you have to find ways to encourage your employee-owners to want to learn about it."

The process is strictly regulated by the federal government, which sometimes changes the rules.

For instance, when Zachary's Chicago Pizza implemented its ESOP, employees were required to work there for three years before they were vested in the plan. But a few years later, the law was changed so that the company had to give stock to employees who leave after just two years. While Gabel and her husband and co-founder, Zach Zachowski, don't like the new rule, they didn't want to freeze the ESOP altogether, so they had to comply.

Even with inherent difficulties, founders of ESOP companies say it's worth it.

"Aside from the complexity and the downsides, the ESOP option does allow founders a way to achieve the ultimate success, which is to reach back and pass on their own success to the next generation," Gabel says. "Currently, our employees own about 75% of the company, and are on the brink of owning 100%. It will be with a sweet sense of joy and pride that we sit on the sidelines and watch them create their own destinies."

Raiding the retirement fund to keep your biz afloat

How to sell your business - even now