Raiding the retirement fund to keep your business afloat 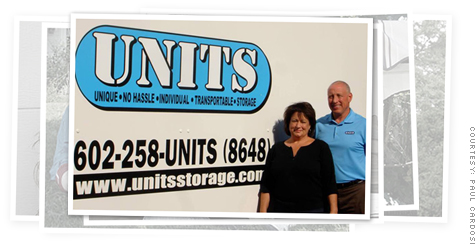 Paul Cardosi, pictured with his wife Annette, used his 401(k) to finance the purchase of his Units storage franchise.By Eilene Zimmerman, contributing writerJanuary 15, 2010: 5:15 AM ET

(CNNMoney.com) -- Like many business owners these days, Bob and Joyce Stubbe are facing a cash crunch.

Business is slow at AFM Industries, their aerospace tooling shop in Anaheim, Calif., and clients are taking longer than usual to pay. Banks still aren't lending, and Bob Stubbe doesn't want to max out his home equity line of credit, especially now. Nor does he want to lose his business -- Stubbe believes that as the economy recovers, it will too. His last-ditch option? Raid the 401(k).

The couple used their retirement money about four years ago during another industry downturn, recovered, and started a new 401(k). "I've got a sizeable amount in it now again, but this is the nature of the beast," says Stubbe. "What is more important to us, the 401(k) we'll need in 15-20 years or the survival of the business? I'm 54 years old. Today, I think the business is the most important thing."

Financial advisors view retirement savings -- which are protected in the event of bankruptcy -- as a sacred cow and rarely recommend using it to fund a business. Yet for some, it's the only option they have left.

"I'm seeing more and more business owners using this money now than I ever did before," says Sandy Abalos, a CPA and managing partner of Phoenix-based Abalos & Associates. "They never used to touch their retirement assets. And every single one of those I've seen use it all ended up in bankruptcy. I would say maybe 5% of small businesses can viably use retirement money."

Her first rule: Business owners should never use retirement money to fund a company that is losing money. An owner desperately hanging on isn't looking objectively at the viability of their business. "Before ever tapping into retirement money, get your accountant to give you an honest assessment," Abalos recommends.

A recent survey of 2,000 small businesses owners by consulting firm Information Strategies found that 74% said they would tap into their 401(k) to keep cash flowing through a revenue slowdown or if they needed the money to expand business. Entrepreneurs are also using retirement money to fund startups, because small business loans and venture capital are scarce.

Brian Burt, 42, financed his new venture, MaestroConference, with IRA money. The Oakland, Calif., business enables interactive phone conferencing among thousands of people. Burt began building the prototype in April 2008, and by September, he was ready to raise money.

But then "the market went crazy, and financing seemed unlikely," he says. Like most entrepreneurs, Burt was convinced he had a winning idea. Rather than let it languish, he liquidated 80% of his IRA and paid the 10% federal penalty for early withdrawal. Because he was just starting up, Burt was spending -- rather than making -- money. That put him in a super-low tax bracket.

"For me, I was able to get money relatively cheaply. It was the best investment I ever made, but it was certainly a risk," he says.

It was a carefully calculated one, however. Burt has no children or big mortgage to worry about. And the former management consultant has good instincts: Since last February he has raised more than $700,000 in financing, most of it from MaestroConference's customers.

Another way to use retirement funds is as a stopgap measure. That path is for businesses with steady revenue but whose clients are taking longer than usual to pay their bills. Using a little-known timing trick, you can borrow from your IRA without penalty or tax consequences as long as you put the money back within 60 days. "It would be okay to do this, for example, if you have a contract with the federal government or a state agency and you're sure you will receive payment, but you have to pay your employees, vendors or contractors up front," Abalos says. "Still, it's a last resort."

Some 401(k) plans are set up to allow participants to borrow money and pay it back over time with interest, which goes back into the retirement fund. Few small businesses, however, have 401(k) plans set up that way, because tracking those loans is expensive, says Rick Keller, a certified financial planner and CEO of First Foundation Advisors in Irvine, Calif.

Another option is to transfer the money in your IRA or 401(k) to a firm that allows self-directed investments. That allows you to invest directly in a company. Custodial firms like Pensco, Guidant Financial and Trust Administration Services handle the paperwork and navigate the legal requirements to do this.

"The upside to using money this way is there is no penalty and you don't pay tax, because instead of having your IRA money invested in a mutual fund, for example, you are investing it in your own business," Jon Burgstone, founding faculty chair and adjunct professor at the Center for Entrepreneurship & Technology at UC Berkeley. "That said, you're still taking a tremendous risk, especially if you invest everything."

Paul Cardosi, 52, used a self-directed IRA to buy his Units Mobile Storage Franchise in Phoenix in May 2009. After spending 28 years in corporate jobs, he got laid off. Rather than trying return to that world, Cardosi wanted to work for himself.

He used a method known as ROBS -- "rollover as business startup" -- to create a new corporation with the help of Guidant. The new business had its own 401(k) plan, for which he directed the investments. He put about $250,000 from his longstanding corporate 401(k) into the new one.

"It enabled me to buy an existing franchise that had been started a year earlier. Now the new 401(k) owns the majority of the business, but I haven't lost the money, I just invested it," he says. "When I sell, the money goes back into the 401(k)."

Cardosi knew he was taking a big risk in using a substantial chunk of his nest egg for a new venture. Six months out, though, his sales were up more than 200% from what they were when he first took over. Looking back, he says the decision was "absolutely a positive for me. In fact, it would have been hard for me to start up any other way."