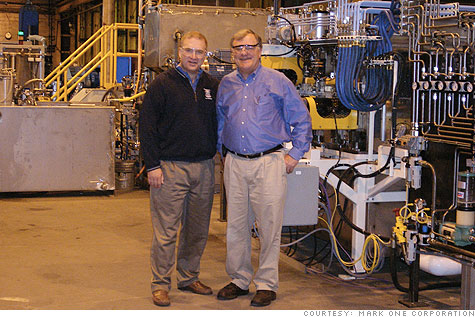 NEW YORK (CNNMoney.com) -- Many state programs that help small businesses get loans they need to survive or expand are in jeopardy, victims of the economic downturn and state budget gaps.

The programs -- in dozens of states from Vermont to California -- cost relatively little to run, are remarkably successful and create jobs.

Massachusetts' program has been running for 17 years and has made almost 4,300 loans. Indiana kicks in more for loans that will lead to high-paying jobs.

The loans are a lifeline at a time when small businesses are still struggling to get credit from banks. In the last two years, $40 billion worth of bank loans has evaporated, according to bank reports submitted to the government.

But many of the programs, which marry private lending with state dollars, are running out of cash, and states can't afford to shoulder the burden on their own.

"I don't have a lot of hope that there will be more money available at the state level," said Greg Main, CEO of the Michigan Economic Development Corp., which operates a couple of highly regarded state capital access programs.

The states and President Obama have been lobbying Congress for help. Tucked in a $40 billion small business bill, the $1.5 billion State Small Business Credit Initiative hasn't gotten much attention. It's a small provision, but it could be a game changer. The bill has been stuck in Congress for months. Lawmakers are planning to take it up when they return next month.

States backstop loans: Michigan has one of the most innovative loan programs, but it's nearly broke.

The Supplier Diversification Fund helps manufacturers get access to financing to transition into growing industries like alternative energy, medical products and defense equipment.

In addition to looking at borrowers' profit streams, many banks require collateral like real estate or equipment to back loans. As the recession dragged down the value of such collateral, manufacturers have been all but shut out by banks.

Michigan's diversification fund helps bridge the gap: The state puts money in the bank to offset the company's depressed profits and the depreciated value of a business' assets. As the business pays back the loan, the value of the collateral recovers, or the profit stream improves, the bank releases the funds back to the state.

The program started with just over $26 million from the state and so far, $17 million has been committed.

"Our queue is growing exponentially by the day," said Paul Brown, vice president of the Capital Access and Business Acceleration group in Michigan. "We have something like 50 that are in the final stages of the loan application and hundreds more inquiries that are just beginning the process."

The fund has helped Mark One Corp., which has been supplying machines that make automotive parts since 1972, reinvent itself.

Five years ago, the Gaylord, Mich.-based company began work on an energy efficient process to clean steel. GreenCleen just started to hit the market when the recession hit with full force.

"Many manufacturers in Michigan, in the Midwest and around the world, particularly automotive capital goods, were really harmed by this," said Frank Kestler, majority owner of Mark One.

Mark One got a $2 million loan, with about half coming from the state fund, and has so far sold three of its multi-million dollar GreenCleen machines.

If a business defaults on the loan, the bank keeps the lion's share of the state's money. However, to date, Michigan has never had a loan default with the collateral support program: Both the bank and the state have an incentive to make the loan to only the most worthy businesses.

"This isn't throwing money down a hole and hoping something happens," said Kestler. "It really builds on what is already there, just providing transition money that is going to be paid back."

Jobs are the bottom line: Small businesses are powerful job generators, but they need access to capital to grow and create those jobs.

Saline, Mich.-based Saline Lectronics assembles electronic circuit boards, and the company developed a niche by going after the middle-sized orders that demand more advanced assembly. Saline Lectronics outgrew its facility in 2009 but was unable to get a loan to expand because of the decreased value of its commercial real estate. The state put up about half the value of the loan, and the bank put up the rest.

"Without the state of Michigan's participation, this transaction would not have been done," said Mario Scriberras, president and CEO. Since getting the loan, Saline Electronics has grown by about 30 employees.

There are hundreds more manufacturers in Michigan alone that could benefit from the lending program.

But without help from Uncle Sam, the Michigan program is at the end of its rope.

"Our collateral support program will most likely cease to exist because we won't have the resources for it," said Brown.