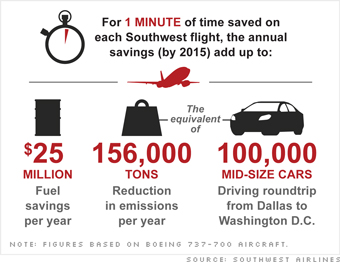 Southwest will begin using it next year and estimates that if it can cut average flight times by one minute, it will save $25 million a year in fuel.

Naverus, based in Kent, Wash., is privately held but has raised almost $24 million in financing. Seven airlines, including Quantas, Air China and WestJet, have already deployed the system. Both Boeing and Airbus, meanwhile, are outfitting new planes with Naverus-compatible hardware. "It's the way everything is headed," says Mike Carriker, Boeing's chief pilot of the new 787. "It has to." Competition? It's coming. Delta and Boeing are testing their own systems. But Naverus has a big head start.