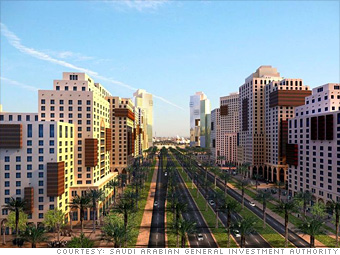 Near Medina, it is slated to be "a hub of scientific research and development," filled with universities and hospitals. Knowledge Economic City has signed deals with several local and foreign companies, most recently Cisco and CompTIA, which will help build the area's communications infrastructure. KEC also hopes to appeal to tourists and to those who want to retire in what is considered the second most sacred city in Islam.

RSS
More from Fortune
Saudi Arabia's new gold mine
Forget oil. Prospectors are looking to strike it rich off of gold - the shiny kind. (more)

Oil city
Reliance Industries is spending $6 billion to expand a massive refining hub in India that is one-third the area of Manhattan and will one day process 5% of the world's gasoline. (more)