The Saudi government is planning four new cities to serve its exploding population and make its economy less dependent on oil. 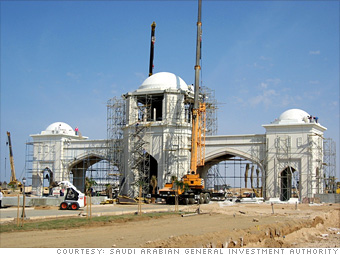 As designed, the cities will have a total of four times the geographic area of Hong Kong, three times the population of Dubai, and - so the Saudis claim - an economic output equal to Singapore's.

The coastal King Abdullah Economy City is designed to house two million in an area twice the size of Hong Kong. Entirely funded by domestic and foreign private investors, this is the only one of the four planned cities that is currently under construction. Aside from the seaport and residential area, KAC will also house a sprawling industrial zone, a central business district, a sea resort, and a multi-university education campus.
By Barney Gimbel and Casey Feldman

RSS
More from Fortune
Saudi Arabia's new gold mine
Forget oil. Prospectors are looking to strike it rich off of gold - the shiny kind. (more)

Oil city
Reliance Industries is spending $6 billion to expand a massive refining hub in India that is one-third the area of Manhattan and will one day process 5% of the world's gasoline. (more)