Meet the sultans of style 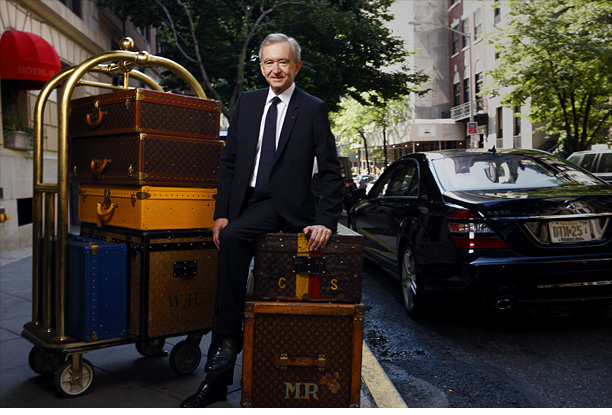 As chairman, CEO, and controlling shareholder of LVMH Moët Hennessy Louis Vuitton, Bernard Arnault presides over a $24 billion portfolio of more than 50 brands, running the gamut from Fendi to duty-free airport mainstay DFS. That means one of France's richest men commands an empire more vast than Xerox's. This breadth has helped LVMH shrug off the economic slowdown to post 12% revenue growth for the first half of 2008.

Like many a monarch before him, Arnault is also leaving his mark on Paris: Work has already begun on the Louis Vuitton Foundation for Creation, a Frank Gehry-designed art center in the Bois de Boulogne. And he can celebrate with a glass of Château Cheval Blanc or Château d'Yquem (he owns both vineyards).

Photographed outside the Hotel Plaza Athénée in New York City

RSS
The Business of style

World's most expensive streets
Every city has one - a retail thoroughfare that houses the most exclusive stores. Real estate slowdown or not, these luxury corridors are still thriving - for now. (more)
Mickey Drexler doubles down
J.Crew's CEO says that this is the worst retail environment he's seen in 40 years in the business. His strategy? Launch a new, upscale brand called Madewell. (more)

Luxury market loses its luster
The $270 billion luxury business thought it was recession-proof. But its growth is slowing, and anxiety is higher than a pair of Jimmy Choo pumps. (more)