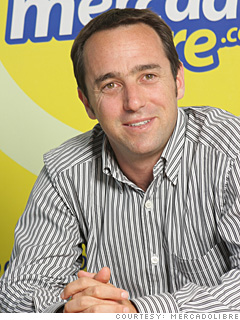 Half off pays in full for Groupon
Founder and CEO, MercadoLibre
Age: 39
Rank change: New
Industry: Technology
In 1999 the Argentine B-school student built an early Internet lead in Latin America, founding online marketplace MercadoLibre; eBay bought an 18% stake in 2001. Since its 2007 IPO, its stock has climbed 127%; revenue grew 26% last year. Galperin's online platform competes with eBay's PayPal, which may be an issue going forward, especially with 43 million registered users and counting. But the 52,000 Latin Americans who now get most or all of their income selling products on the platform aren't complaining.

NEXT: 11. Greg Jensen
Last updated October 14 2010: 1:25 PM ET
40 under 40
Highest paid under 40
Which young executives at public companies brought home the most bacon this year? And exactly how much bacon are we talking about? More
Where is the economy heading?
This year's innovators offer their economic predictions for the next few years and beyond. More
Ones to watch
They may not have made the list this year, but we're keeping an eye on these rising stars. More