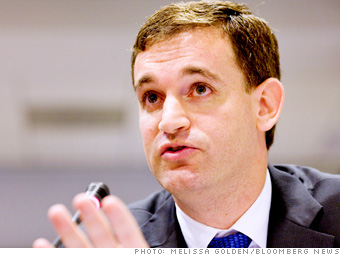 Half off pays in full for Groupon
Founder, Centaurus Advisors
Age: 36
Rank change: Same
Industry: Finance
With an estimated net worth of more than $3 billion, the master energy trader is the second youngest American billionaire (see No. 2). His Houston-based $5 billion hedge fund is one of the decade's most successful, returning more than 200% in some years (though it is said to be having a lackluster year). The former Enron trader also invests in hard assets like underground storage caverns for natural gas, which will make him an even larger figure in this burgeoning market.

Big giver: Arnold and his wife recently took the Warren Buffett-Bill Gates pledge to give half their wealth to charity.

NEXT: 10. Marcos Galperin
Last updated October 14 2010: 1:25 PM ET
40 under 40
Highest paid under 40
Which young executives at public companies brought home the most bacon this year? And exactly how much bacon are we talking about? More
Where is the economy heading?
This year's innovators offer their economic predictions for the next few years and beyond. More
Ones to watch
They may not have made the list this year, but we're keeping an eye on these rising stars. More