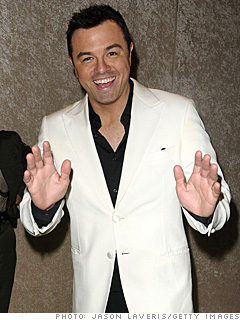 Half off pays in full for Groupon
Creator, writer, producer, Family Guy
Age: 37
Rank change: Down
Industry: Hollywood
Hollywood multitalent MacFarlane hit the road to lambaste Arizona's immigration law and California's gay marriage ban in 2010 but somehow made all his protests hilarious -- a secret of his success. TV's highest-paid writer-producer in history (his $100 million contract with Fox runs through 2012) has three primetime satires: Family Guy, American Dad, and The Cleveland Show. This year Family Guy, already a $1 billion-plus franchise, became the bestselling TV series ever on DVD.

New gig: Universal picked up rights to his $65 million live-action/CGI film about a man and his teddy bear.

NEXT: 29. Dennis Crowley
Last updated October 14 2010: 1:25 PM ET
40 under 40
Highest paid under 40
Which young executives at public companies brought home the most bacon this year? And exactly how much bacon are we talking about? More
Where is the economy heading?
This year's innovators offer their economic predictions for the next few years and beyond. More
Ones to watch
They may not have made the list this year, but we're keeping an eye on these rising stars. More