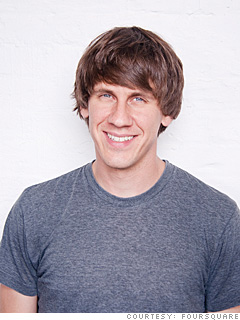 Half off pays in full for Groupon
Co-founder and CEO, Foursquare
Age: 34
Rank change: New
Industry: Technology
Crowley shook up social media with his location-based software that allows users to broadcast their whereabouts, "checking in" for all who care. A year and a half after launching, Foursquare has some 3.7 million users; in June the company got a $20 million injection from big-name investors like Union Square Ventures and Andreessen Horowitz (see No. 1). One challenge: Others, most notably a company called Facebook, are on to location-based services of their own.

Track record: Crowley previously founded Dodgeball, a similar service Google bought in 2005 and shut down in 2009.

NEXT: 30. Karl-Johan Persson
Last updated October 14 2010: 1:25 PM ET
40 under 40
Highest paid under 40
Which young executives at public companies brought home the most bacon this year? And exactly how much bacon are we talking about? More
Where is the economy heading?
This year's innovators offer their economic predictions for the next few years and beyond. More
Ones to watch
They may not have made the list this year, but we're keeping an eye on these rising stars. More