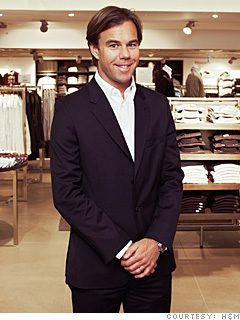 Half off pays in full for Groupon
CEO, H&M
Age: 35
Rank change: New
Industry: Retail
Persson, whose grandfather founded Swedish fast-fashion chain H&M, grew up immersed in the family business. After business school he started an events company, which he later sold. He joined H&M in 2005 and became CEO last summer, a time when the retailer was experiencing a slowdown in sales; things bounced back, and sales were up 14% during the first nine months of the year, to about $12 billion. Last year, H&M opened 250 new stores, as Persson led the world's third-biggest clothing chain into new markets like Russia and South Korea.

NEXT: 31. Rio Caraeff - Tie
Last updated October 14 2010: 1:25 PM ET
40 under 40
Highest paid under 40
Which young executives at public companies brought home the most bacon this year? And exactly how much bacon are we talking about? More
Where is the economy heading?
This year's innovators offer their economic predictions for the next few years and beyond. More
Ones to watch
They may not have made the list this year, but we're keeping an eye on these rising stars. More