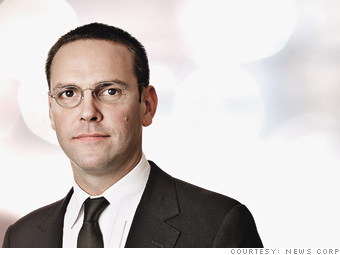 Half off pays in full for Groupon
Chairman and CEO, Europe and Asia, News Corp.
Age: 37
Rank change: Down
Industry: Media
As the only one of Rupert Murdoch's adult children in an executive role at News Corp., James has built his own identity while remaining close to his father. He runs the newspaper, digital, and satellite businesses in Europe and Asia; last year News bid for the 61% of satellite and broadband operator BSkyB it doesn't already own and put its British newspaper behind a pay wall. If the BSkyB deal passes muster with regulators, James could sit atop the most powerful media group in Europe -- and having supported the candidacy of the new Prime Minister can only help his cause.

NEXT: 9. John Arnold
Last updated October 14 2010: 1:25 PM ET
40 under 40
Highest paid under 40
Which young executives at public companies brought home the most bacon this year? And exactly how much bacon are we talking about? More
Where is the economy heading?
This year's innovators offer their economic predictions for the next few years and beyond. More
Ones to watch
They may not have made the list this year, but we're keeping an eye on these rising stars. More