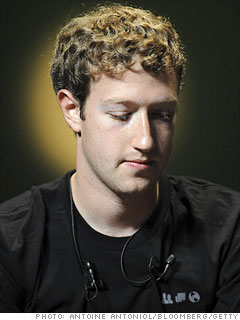 It's been a big year for the youngest self-made billionaire on the planet. The website Mark Zuckerberg founded six years ago in his Harvard dorm room has now registered more than 500 million users globally, and half of them log in every single day. Last spring Zuckerberg announced a plethora of social tools that let other websites take advantage of the personal relationships Facebook has mapped, creating a potential big business for selling user data. Although the government is examining Facebook's privacy controls, users seem to be unfazed, entering sites like Pandora.com and NYT.com with their Facebook logins. More recently Zuckerberg extended this capability to mobile platforms as well. The company has shown no slowing in its innovation drive. This year it made more than a dozen improvements. For example, users can now check in with Facebook Places, a feature that notes their locations as status updates. And it has gained mainstream attention -- along with ad spending -- from advertisers. Facebook will bring in at least $1.3 billion in 2010, mostly from display advertising. At 26, Zuckerberg has matured into a focused and driven CEO. Unlike many young leaders, he's already started crafting a legacy (not a bad move, considering the negative press around privacy he and his company generated). This year he gave $100 million to a foundation to support the Newark public schools, despite the fact that his company has yet to go public. But perhaps most people will remember 2010 as the year Hollywood made Zuckerberg into a legend, turning his life into a blockbuster film. The somewhat fictional account of Zuckerberg's early days, which paints an unflattering picture of him as a social outcast, goes way back to 2005 when Facebook was just a college kid's after-hours entertainment. Remember that?

NEXT: 5. Ellen Kullman
Last updated November 19 2010: 10:47 AM ET
More from Fortune
Reader's Choice
After a month of rabid online voting you crowned your own Businessperson of the Year. More
Reed Hastings: Leader of the pack
Executives from Silicon Valley to Hollywood to Wall Street admires his savvy persistence - and his company's cool culture. The secret to the Netflix CEO's success? He never stops looking over his shoulder. More
When they were young
Michael Dell was 21 when he first appeared in Fortune. Bill Gates made the cover when he was 30. Here's a look back at some of today's biggest business leaders when they were climbing the corporate ladder. More