Nervous about the outlook for equities next year? If you think the S&P 500 is overpriced, here are five places to park your cash in 2011. 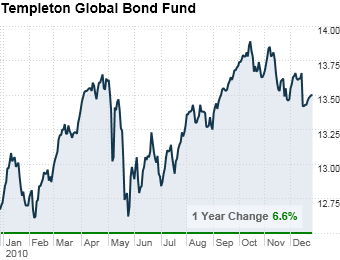 With all the recent talk about a bubble in bonds, can fixed-income still be a safe haven if stocks crash? The quick answer is yes, if you pick the right place to invest. One of the best places to be in recent years has been Templeton's Global Bond fund, which is led by Michael Hasenstab. Since he took the helm in 2001, Hasenstab has steered the bond fund to 12% annualized returns, according to Morningstar, far outpacing the benchmarks.

He's done it largely by avoiding convention. Hasenstab doesn't hold U.S. or Japanese government debt. Instead, he likes the bonds of countries with low-debt levels and solid growth prospects, such as South Korea and Australia. Even as the fund has attracted more than $18 billion of new money this year, Morningstar analyst Miriam Sjoblom thinks it can keep succeeding. "This Analyst Pick shows no signs of slowing," Sjoblom wrote in her most recent report.