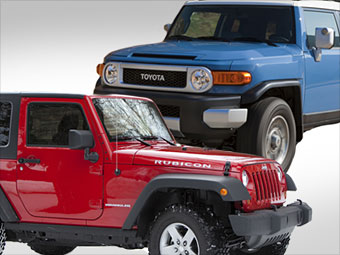 Cars that can plow through mud bogs or traverse mountain passes blocked with boulders mainly attract younger buyers who typically dream of trying such stunts. That's why Chrysler's Jeep Wrangler remains a favorite with this demographic, and it's a much more popular choice than Toyota's idiosyncratic FJ Cruiser.

The Wrangler's base model costs about $22,000 at retail, around $4,000 less than the FJ. True, Wrangler has a smaller engine. It also features removable doors, great clearance for driving over those big, humongous boulders and a washable interior to clean up after heaven-knows-what activities.

Wrangler has another advantage, the name Jeep, which is one of the world's most recognizable brands. Toyota has some work to do before anyone mentions "FJ" in the same breath as "mudbogging."

NEXT: Chevrolet Equinox vs. Honda CR-V
Last updated February 24 2011: 12:00 PM ET
More
General Motors and BMW rev up venture capital arms
General Motors, BMW, and other automakers are giving venture capital a try after a long history of being late to the game. More
What Toyota learned from Detroit
With its years of rapid sales gain maybe behind it, Toyota has had to turn its attention to cost cutting -- just like the Detroit automakers GM, Ford and Chrysler learned to do. More
From electric cars to military ops
General Motors pulled the plug on its first electric car, but supplier AeroVironment used some of that experience to build a very different kind of vehicle for the U.S. military. More
Find Your Next Car