The Detroit Big Three have spent decades dealing with questions of quality in their cars and trucks. Suddenly, and on the heels of an industry bailout, they are offering products that can meet or even beat the imports. Here's how they stack up. 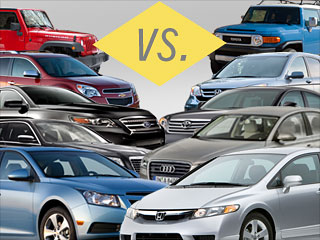 The 2011 Super Bowl was a remarkable event for television viewers in Detroit when Chrysler's "Imported from Detroit" advertisement dazzled television audiences. Strictly speaking, the ad was a pitch for Chrysler's new 200 sedan. But Eminem's music also served as an anthem for the rebound of the Detroit Three.

A resurgent attitude reigns in Detroit these days, traced to rising new-vehicle sales in the U.S., lifting the boats for General Motors Co., Ford Motor Co. and Chrysler Corp. The rise results partly from a strengthening economy, and in no small part from a bevy of vehicle models that are able to contend with counterparts from foreign manufacturers -- or even best them in terms of value and performance.

Apples-to-apples comparisons among vehicle models are always difficult. But the Big Three are rumbling with Toyota, Honda, and even Audi, and not getting thrown out of the ring. Detroit has managed to narrow the differences with the competition and in some cases erase them.

Now the city's industry faces the job of convincing the public. With perceptions lagging reality, the time finally may have arrived for the Motor City to capitalize on its hard-fought achievements. Let's take a look at some of the matchups of foreign car vs. domestic, where every battle for a customer is a main event.

By Doron Levin, contributor
NEXT: Chevrolet Cruze vs. Honda Civic
Last updated February 24 2011: 12:00 PM ET
More
General Motors and BMW rev up venture capital arms
General Motors, BMW, and other automakers are giving venture capital a try after a long history of being late to the game. More
What Toyota learned from Detroit
With its years of rapid sales gain maybe behind it, Toyota has had to turn its attention to cost cutting -- just like the Detroit automakers GM, Ford and Chrysler learned to do. More
From electric cars to military ops
General Motors pulled the plug on its first electric car, but supplier AeroVironment used some of that experience to build a very different kind of vehicle for the U.S. military. More
Find Your Next Car