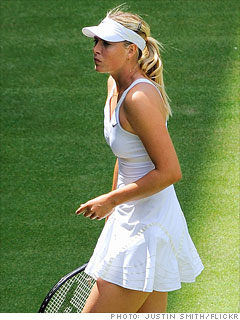 • Ted Forstmann's bad bet
People are always surprised that Sharapova is only 23. She's a household name even among tennis newbies, with three Grand Slams under her belt, the first of which she won at 17 by upsetting top seed Serena Williams (whose sister Venus is an IMG client). She's also easy on the eyes (at least according to the Sports Illustrated swimsuit issue and Maxim).

A series of ads have made Sharapova recognizable as the face of Canon PowerShot, but she also has sponsorships with Tropicana and Gatorade. Her latest Nike deal, signed a year ago, was an eight-year contract worth $70 million. That, no doubt, helps contribute to reports that she's the highest-paid female athlete in the world.

NEXT: Tiger Woods
Last updated February 15 2011: 5:20 AM ET
More from Fortune.com
Ted Forstmann's bad bet
Allegations of sports betting and more have cast a pall on the buyout king's comeback. True or not, it doesn't look good. More
Was my sports bet legal?
From March Madness to online poker -- what's legal and what's not in the world of sports betting. More