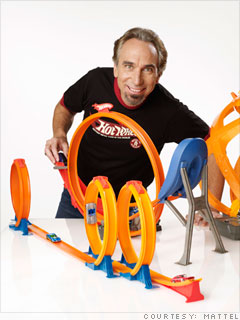 You'd be surprised how many ways you can make a toy car crash. In fact, it's been Eric Ostendorff's job for the past 27 years to think up new, inventive ways to flip tiny cars around plastic tracks as a designer for Mattel's Hot Wheels brand. "If your toy is hurting, add loops and crashing. Crashing inside loops, even better," he says.

An engineer by training, Ostendorff works on rough designs for toy track models at the company's headquarters in El Segundo, Calif. Before joining Mattel in 1983, he worked as an engineer for Pratt & Whitney Aircraft in West Palm Beach, Fla.

But he says he's always wanted to design toys; in fact he's been building them since long before it was his bread and butter. In college, Ostendorff won a prize for a rubber-band-powered car that protected a raw egg it was carrying while crashing into a wall.

Now, he works with a group of about 3 or 4 other designers to collaborate on a trackset. "We grab some rough plastic and we cut it and chop it and glue it together ourselves. We get our hands dirty building these things. We work together and play together." Ostendorff is also a member of the Hot Wheels' bicycling club. He adds that his colleagues inspire a lot of the cool new ideas he has for toys. "You can grab the dozen people closest to you to have a last-minute quickie brainstorm to come up with a new idea."

But the key to his job, he says, is to love to build. Anyone can make a pretty drawing, he says, but "until you have something in your hand and you can actually play with it, you can't be sure if it's fun or not."