How we pick them

The Most Admired list is the definitive report card on corporate reputations. Our survey partners at Hay Group started with approximately 1,400 companies: the Fortune 1,000 (the 1,000 largest U.S. companies ranked by revenue), non-U.S. companies in Fortune's Global 500 database with revenue of $10 billion or more, and the top foreign companies operating in the U.S.

They then sorted the companies by industry and selected the 15 largest for each international industry and the 10 largest for each U.S. industry. A total of 698 companies from 32 countries were surveyed. (Due to an insufficient response rate, the results for 11 companies in the scientific, photographic, and control equipment industry were not published. In addition, due to the distribution of responses, only the aggregate scores and ranks for the 10 companies in the oil and gas equipment/services industry were published.) To create the 58 industry lists, Hay asked executives, directors, and analysts to rate companies in their own industry on nine criteria, from investment value to social responsibility. This year only the best are listed in the magazine: A company's score must rank in the top half of its industry survey. Online, all companies' results are displayed.

To arrive at the top 50 Most Admired Companies overall, the Hay Group asked 3,855 executives, directors, and securities analysts who had responded to the industry surveys to select the 10 companies they admired most. They chose from a list made up of the companies that ranked in the top 25% in last year's surveys, plus those that finished in the top 20% of their industry. Anyone could vote for any company in any industry. The difference in the voting rolls is why some results can seem anomalous -- for example, although FedEx is one of the top 10 Most Admired Companies, it is second in the Delivery industry behind top-ranked UPS, which ranked 29th on the top 50 overall.

If you have further questions about the Most Admired Companies, please e-mail fortunespecials@fortune.com.

The experts chose the top 50. Now it's your turn. 'Like' the company you most admire to vote. The top 5 reader favorites are below. 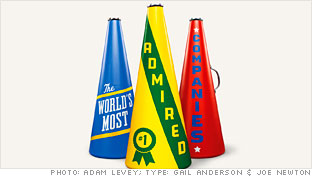 How we pick the Most Admired
The Most Admired list is the definitive report card on corporate reputations. Our survey partners at Hay Group start with about 1,400 companies... More