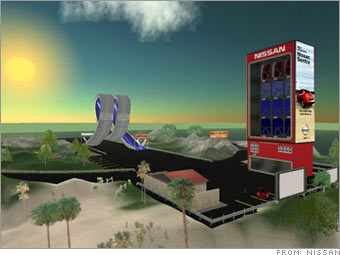 Nissan Island
Nissan, which opened its Second Life dealership in October, is providing copies of its Sentra to residents free of charge. The cars are delivered from a vending machine the size of an office building. But first, you have to request a meeting with someone named Toast Alicious. He is, as you might have guessed, a piece of toast.

Put the token into the giant machine and out pops a Sentra. It's yours to keep and drive as long as you like. Nearby on Nissan Island is a test track with a vertical loop so you can test out your driving skills.

So far, Nissan has handed out about 2,500 virtual Sentras.

Nissan's cars have only limited customization possibilities, complained Reuben Steiger, chief executive of Millions Of Us, the company working with Scion and Pontiac to create their virtual corporate presences.

"You can't turn the hood into a dragon head," said Steiger, "which would be really cool."

Nissan aimed, instead, for a lifelike representation of the product. The only available colors are those you could get on an actual Sentra. Even the interior is rendered in true-to-life detail, except for a few additional items like an anti-gravity button in the middle of the dashboard. It's needed to drive around the giant loop.
More Autos
Extreme 'green' cars of the future