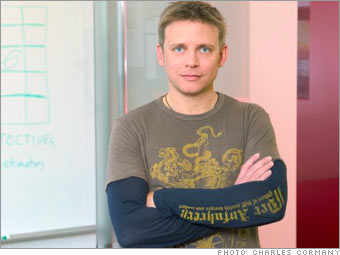 Philip Rosedale
Founder and CEO, Linden Lab
Discover the Real-Life Take-Away in Virtual Economies
As a futurist, I think it is very possible that the economies around virtual items or identities will become bigger than similar economies in the real world. When your avatar looks like a Hollywood movie, and when you build a character so rich that you can see every tattoo, pore, scratch, and nose ring, you can see a situation where people become more tied to that identity than to their actual bodies because it is easier to modify. There are people who have lost weight or improved their physical bodies as a result of being in Second Life. You wouldn't think that would happen. Second Life is so plastic. The environment of Second Life and the world around you is so easily edited that it creates a subtle expectation in you that you are able to do that in the real world. There are a bunch of anecdotes that support this. One guy said, "I lost 70 pounds because of Second Life," and I e-mailed him right away and said, "No way!" He said, "For two years I have been a designer in Second Life. I've been making buildings, but every day I change my avatar. After a couple years of that, I said it is so easy to change my avatar, it cannot be that hard to do that to myself." The world in Second Life is so easy to change. It is so plastic that it's addictive. It's infectious. You come to see the real world that way: Why can't I paint these walls?