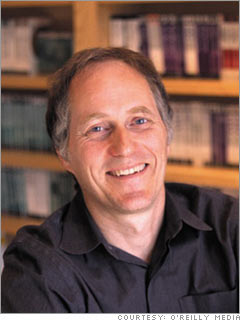 Tim O'Reilly
Founder and CEO, O'Reilly Media
Put Yourself at the Center of the Action
The rules for marketing a conference like our Web 2.0 event are pretty much the same as those for marketing anything else. Here are the ones we follow.

1. Be first. This is one of the immutable laws of marketing. Who was the first person to fly across the Atlantic? Lindbergh. Who was the second? No idea.

2. If you can't be first, create a new category so you can be first. Who was the first woman to fly across the Atlantic? Amelia Earhart. New category. We didn't have the first Web conference out there, but when we applied "Web 2.0" to the category, we created something new.

3. Position yourself at the leading edge of a new wave. The way to make sure you recognize the next big wave is by watching what I call the alpha geeks. You find people who are cool, by whatever metric you want to apply. It would be the same thing if you were marketing sneakers. And then you find out what the cool people are doing and you spread the word about it. This isn't to say there aren't audiences for whom cool might not be the right measurement, but it works for us.

4. Tell a big story. We don't market products narrowly. We market big stories about the industry, things that matter to a lot of people. In 1992 we came out with The Whole Internet User's Guide and Catalog. Instead of marketing the book, we marketed the Internet using the book, and said the Internet is coming and by the way here's a book where you can learn about it. In planning Web 2.0 in 2003, we came up with a goal to reignite enthusiasm in the computer industry. We said, here's something that distinguishes the companies that survived the dotcom bust, here is something that is bubbling up again, so we gave it a name - Web 2.0 - and started telling a story about what was new and important in technology. Sometimes giving it a name helps people to see it.

6. Care about the attendees. There are a lot of lousy conferences that pander to sponsors. They end up creating an opportunity for boring speakers who are paid shills for their companies. We still get a few of those, but we really try to police it. Think about who the audience is and what works for them, and deliver high-quality content.