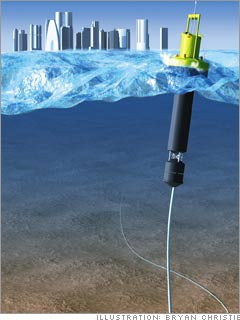 Starting in 2007, massive, predictable waves off the coast of Oregon will help light homes and businesses along the West Coast, thanks to an entrepreneur named George Taylor. A former surfer who grew up in Australia, Taylor, now 72, studied electrical engineering and spent the past 40 years as a small-business owner in the U.S. His most recent invention is a buoy that can convert a wave's up-and-down motion into electricity, which can be carried ashore by undersea cables and fed into the national power grid.

The buoys are an environmentalist's dream - barely visible from the beach, drawing on an abundant, renewable energy resource, with little or no impact upon marine life and emitting no gases that contribute to global warming. Buttressing Taylor's optimism, researchers at Oregon State University say that only 0.2 percent of the ocean's untapped wave energy could power the entire world. The buoys Taylor plans to install off Oregon in 2007 will generate electricity at rates competitive with that produced by coal - currently the cheapest, most abundant, most commonly used (and dirtiest) source of energy. Future generations of the buoys could conceivably produce power more cheaply than that.

By the year 2010 Taylor plans to have a 100-ton, 37-foot-wide buoy that could generate 500 kilowatts. An array of 40 buoys that size, linked together, could generate electricity at prices significantly less than that of a typical coal-burning power station, and far less than the price at plants that burn more expensive fuels such as natural gas. Clean electricity that cheap could be used to desalinate seawater, split water molecules to make hydrogen for fuel-cell cars or provide inexpensive power for other ambitious, energy-hungry projects. --Dan Drollette
More
Battle of the business plans