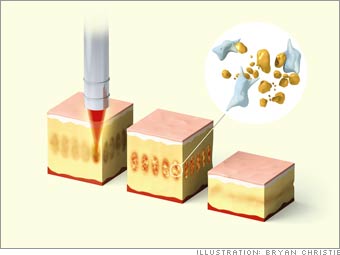 Vacuuming fat from more than 455,000 patients - and some $1.2 billion out of their wallets - made liposuction the No. 1 cosmetic surgery procedure in the U.S. in 2005. Like many operations, standard liposuction procedures carry a risk of infection, other complications and even death. But a startup called LipoSonix hopes to minimize such dangers with a device that can dissolve fatty tissue without penetrating the skin.

The device uses high-intensity ultrasound energy, which breaks down the adipose tissue, or fat. About a week after the procedure, which takes about an hour and requires no hospitalization, "the body's normal healing response takes over," says LipoSonix CEO Dr. Jens Quistgaard, and the fat cells are reabsorbed and metabolized.

About 70 patients have participated in clinical trials in Mexico, which are still underway, and LipoSonix plans to begin testing in the U.S. in early 2007. At the same time, the company plans to stage trials in Britain, France, Germany, Italy and Spain. Depending on how long the U.S. trials take, LipoSonix hopes to hit the market late in 2007.

Don't count on the device to make significant inroads into the current obesity epidemic in the U.S., however. Most patients enrolled in the Mexico test have had one to 1.5 pounds of fat removed during each procedure, and Quistgaard says that number isn't likely to change when U.S. trials begin. By comparison, surgical liposuction can remove as much as five pounds of fat. In other words, LipoSonix may help you lose the love handles, but it won't take away that spare tire. --Mikhail Sedov
More
Battle of the business plans