(Money Magazine) -- I may write about retirement for a living, but that doesn't mean I like seeing my 401(k) crater any more than you do. Given what's been happening in the market, I sometimes catch myself thinking how great it would be if my financial future weren't tied to something as volatile as Wall Street's mood.

So it was with a twinge of envy that I reflected on the recent saga of nearly 20,000 West Virginia teachers who were unhappy with their 401(k)-style retirement plans. What transpired illustrates why so many Americans are headed for a retirement crisis. 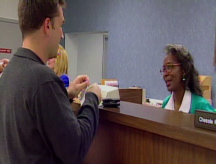 Back in 1991, the State of West Virginia barred new teachers from participating in the state's traditional defined-benefit pension plan, the kind that gives you a guaranteed annual income in retirement. The plan had become the worst funded of its kind in the nation, requiring large injections from the state.

To stem the bleeding, West Virginia forced new teachers into a 401(k)-style savings plan. Their ultimate retirement incomes would now depend mostly on their ability to save and invest.

Fast-forward to today. For the majority of West Virginia teachers, this new plan has been a disaster. The average account balance in 2007 was just $33,944, and only a handful of those age 60 or older had amassed more than $100,000, according to a study by West Virginia's Consolidated Public Retirement Board.

So the teachers asked for a do-over. Under their proposal, their paltry account balances would be replaced by the more generous pensions they would have racked up had they been in the traditional plan all along.

Essentially, the past 17 years would be treated as if they'd never happened. The legislature agreed, and on July 1 four out of five teachers made the switch.

What happened in West Virginia is a scary microcosm of a 401(k) system that's the only retirement plan for millions of Americans. For most, it's not coming close to generating enough money to fund a decent retirement. But unlike in West Virginia, most of us won't get a do-over.

One obvious problem is that we're a nation of undersavers. The median 401(k) contribution rate is a low 6% of pay, according to research by Vanguard. A third of workers who have access to a plan don't contribute at all. The trend toward automatic enrollment is helping but not enough; the median savings rate for workers signed up automatically is 2.9%.

When it comes to investing, the story is just as troublesome. More than 70% of 401(k) participants never rebalance their portfolios, says Hewitt Associates.

Only a third of those who can put money in an international stock or bond fund do so, Vanguard data show, even though pros recommend that you invest at least 20% of your portfolio overseas. But that kind of counsel is sorely lacking: Less than half of 401(k) plans offer investing advice.

It may be tempting to imagine that none of this applies to you, especially if you've been diligently salting away money. Don't kid yourself. Unless the savings shortfall is fixed, you'll pay for it one way or another.

According to the McKinsey Global Institute, two-thirds of boomers between the ages of 54 and 63 have not saved enough for retirement. To make up for the gap, they could sharply cut back on spending, slicing GDP growth by more than $5 trillion over the next three decades.

And staying on the job longer is no silver bullet: Some 40% of workers are forced to retire early due to poor health or downsizing.

Perhaps we need to implement a mandatory universal savings program like the one in Australia, where 9% of workers' pay is set aside in a retirement account.

One thing is certain: There's no return to traditional pensions for most of us. We've got to fix the system we have - and soon.

Most of us haven't done a good job running our 401(k)s. But unlike the teachers of West Virginia, we won't get a second chance.