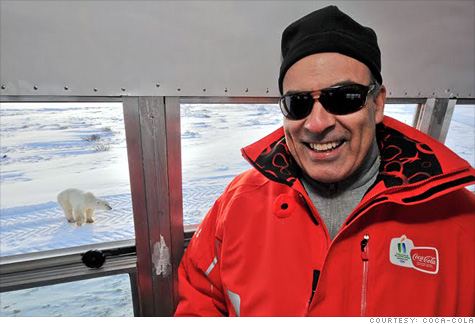 COPENHAGEN (Fortune) -- Polar bears have been featured in Coca-Cola's holiday advertising for nearly a century. Last month, Muhtar Kent, the company's CEO, traveled to the Arctic to see the furry creatures up close.

It must have been cold up there, I remarked.

"Not cold enough," replied Kent, who has emerged as a prominent corporate advocate for a global treaty to curb climate change.

"There were a lot of hungry polar bears waiting for the ice," he said. "They were coming out of hibernation, they'd been on land for months, and they can't feed unless they are on ice. The ice was late in forming, and we saw that with our own eyes."

Kent sat down with Fortune in Copenhagen, where he spent the weekend. He was one of a handful of Fortune 500 CEOs to come to Denmark to throw his support behind a global agreement to regulate carbon emissions.

"It is absolutely imperative that our commitment to a low-carbon future be fully understood," Kent said. "We're here to lend a Coca-Cola voice to the public and political debate on getting to a fair framework, an inclusive framework, an effective framework so that we can achieve climate protection."

Six weeks earlier, Kent had traveled to Churchill, Manitoba, on the shore of the Hudson Bay, to see the effects of climate change for himself. The 57-year-old executive timed his trip so that he could take a turn carrying the Olympic torch, which is making its way to Vancouver for the winter games in February. He was accompanied by Carter Roberts, the president of the World Wildlife Fund, one of the nonprofit partners helping Coca-Cola (KO, Fortune 500) find its own way toward a more sustainable business model -- one that pollutes less, recycles more, requires less water, and holds down its greenhouse gas emissions even as the business grows.

For Kent's predecessor Neville Isdell, who grew up in Africa, nature and conservation were a lifelong passion. By contrast, Kent's focus on sustainability is a matter of business. Global warming creates business risks for Coca-Cola, and not merely because it wants to preserve the tradition of light-hearted advertising with polar bears.

Over the weekend, the company released a report with the World Environment Center and TERI (an Indian advocacy group led by Nobel Prize winner R.K. Pachauri) to call attention to the effects of climate change on water. Some scientists project that 75 to 250 million people in Africa will live under "water stress" by 2020.

"Water is where climate impacts will be most acutely felt," Kent said. Even now, he noted, "lack of clean water kills more people in Africa than malaria and AIDS combined."

The climate-water issue also threatens Coca-Cola's reputation, particularly if the company is seen as taking water from arid areas to make soft drinks. Coke and rival PepsiCo (PEP, Fortune 500) have been targets of protests in India that have aroused activists in the west. A Coke insider says its bottling plants have not taken water from people who need it, but added that the company is trying to do a better job of engaging with communities where it operates.

The water issue is key to Coca-Cola's sustainability efforts, which also focus on carbon emissions and packaging. Some highlights:

-- Coca-Cola has pledged to be 100% water neutral by 2020, meaning that it will return as much water to water systems as it takes. The company is upgrading technology in its more than 900 bottling plants, recycling and treating more of its wastewater, and replenishing freshwater systems in India, Africa, and elsewhere. The company uses about 300 billion liters of water a year, roughly half the amount used in the entire Atlanta metropolitan area, where it is headquartered.

--This winter, Coca-Cola introduced a new package called the PlantBottle, made of PET plastic, 30% of which is sourced from Brazilian sugarcane waste. It's available in parts of the United States, Canada, and Denmark. The company is trying to incorporate more renewable and recycled content in its packages, in part to defuse controversy over the waste associated with soft drinks.

In Copenhagen, Kent held up a plastic bottle made up of 50% recycled content and 15% renewable sugarcane waste.

"That's 65% that is decoupled from fossil fuels," he said. "And there are no issues with performance -- the same clarity, the same shelf life, and yes, a little bit higher cost. But as we scale this up, we know that the cost is going to be competitive and perhaps even less as the price of oil inevitably goes up."

--This month, Coca-Cola and its bottling partners announced that 100% of their new vending machines and coolers will be hydrofluorocarbon-free (HFC-free) by 2015. The company has worked with Greenpeace since 2000 to phase out HFCs, a potent greenhouse gas, from its cooling units, investing more than $50 million in research and development. It has about 10 million cooling units worldwide. "Refrigeration is the biggest piece of our carbon footprint," Kent said.

Where's the business payoff? Kent said while the HFC-free coolers will cost more, they use less energy; major retailers like Wal-Mart (WMT, Fortune 500) and Tesco, a British supermarket chain, are pressuring their suppliers to be more energy-efficient and sustainable. Coca-Cola also hopes its so-called climate-friendly coolers will enhance its image with consumers and the distributors -- colleges, movie theaters, and sports arenas -- who can choose between Coke and Pepsi.

Increasingly, customers in the United States, Europe, and emerging markets are paying attention, Kent said: "They vote for products based on a company's character."

Why the Copenhagen climate talks matter

Why cheap oil is here to stay