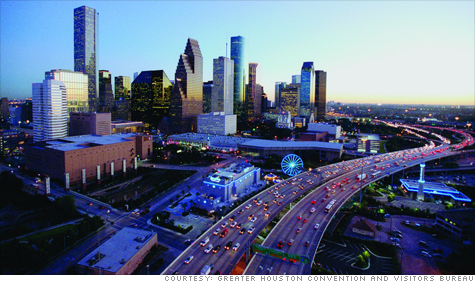 Texas was a big winner in the new Census Bureau estimates, with cities such as Houston drawing new residents. Check out the biggest losers.By Les Christie, staff writerJanuary 5, 2010: 11:34 AM ET

NEW YORK (CNNMoney.com) -- Americans, it seems, still have a love affair with the West. Texas and Wyoming were the big winners in the Census Bureau's annual population estimates, which were released on Wednesday.

In the year ended July 1, Texas added more people than any other state, and Wyoming had the highest growth rate in the nation.

The report is a kind of sneak preview of the next big 10-year census, which will be released in December 2010.

The 10-year census determines congressional representation and federal aid, among other things.

"The census counts will not only determine how many U.S. House seats each state will have but will also be used as the benchmark for future population estimates," said Census Bureau Director Robert Groves.

In Nevada, for example, the population has risen 32.27% since the 2000 Census, more than any other state in the past decade. Nevada currently has three seats in the House and will almost certainly pick up another as a result of its population growth.

See where your state ranks

The future of the so-called Sand States - California, Arizona, Nevada and Florida - is still in question, though. The rapid rise of many of these states through the early part of the decade has been curtailed by the housing crisis.

A similar dynamic played out in Nevada. Its average population increase was 3.6% per year in the five years through 2005, but the state grew only 1% this time. And the growth was due primarily to the birth rate, not people actually moving in.

Both Nevada and Florida actually had more people leave the states than arrive. "More people are moving out of Nevada than are moving in," said Greg Harper, a demographer with the Census Bureau. "That's a real change. For 18 years, it was the fastest growing state."

He added that Florida has had a net loss in domestic migration the past two years after posting the largest net gain in domestic migration for most of the 2000s. The state led the nation as recently as 2005 with nearly 266,000 more people moving into Florida from other states than moved out.

Many communities in these bubble states now have long lists of homes for sale. New construction has slowed, idling workers and hurting local economies.

Some of the once-booming cities in the Central Valley of California, such as Stockton, Modesto, Fresno, Merced and Visalia, and El Centro in the Imperial Valley, are now plagued by job losses. Seven out of the 10 metro areas with the highest unemployment rates are in California.

Other Sun Belt states have fared much better. Texas, for example, never went through the boom-and-bust housing cycle that devastated the Sand States. Home prices remained affordable, and the state's unemployment rate was 8% in October, a full two percentage points below the national average.

Another big leap for home sales