(Money Magazine) -- Last month was open-enrollment season, and my wife and I got an unpleasant surprise. For 2010 we're looking at an annual health-insurance premium that's $1,600 higher than it is now, plus higher deductibles. Instead of flat co-pays, we'll pay co-insurance, a share of the total costs. And this is with a plan provided by a Fortune 500 company that still spends big bucks on relatively generous benefits.

You may well be in the same boat. According to human-resources consultant Hewitt Associates, the average large-company employee will pay $4,023 in premiums and out-of-pocket costs next year -- 10% more than in 2009 and more than three times the level in 2001. 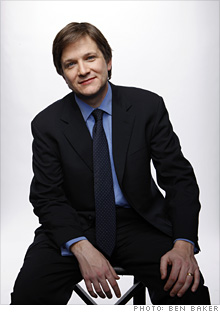 We are witnessing the slow death of what some political scientists dub the corporate welfare system. Until quite recently employees of giant companies essentially lived in Canada, but with shorter lines for the MRI machines. That is, they didn't have to think very hard or very often about medical expenses.

But the relentless increase in health-care costs is unraveling those arrangements year by year. And for many people at smaller firms -- not to mention the self-employed -- those days are already long gone.

But hospitals don't yet post their prices for procedures the way Target does for dish soap. The delivery of my second child wound up costing $1,000 more than that of our first just two years earlier. I have no idea whom I would have talked with to figure out that tab ahead of time.

For families, the new "transparency" can actually feel pretty murky. It makes it harder for them to predict what their medical costs will be in a given year.

It won't get simple soon

There are two schools of thought on why health care is so expensive. And there's truth in both. The first says that patients are ignorant of costs. (The prescription: more of those out-of-pocket payments.) The second looks at the pricing power of doctors and hospitals, as well as their financial incentives.

Years of research out of Dartmouth have documented that spending on health can vary wildly from one region to another, but that the places spending more don't get better health results. Ideally, you want providers to focus on getting you well with just as much treatment as will help and not a scan or pill more. But our piecework system of paying for care rewards them for doing more things.

The health bills now before Congress have some measures that try to change how health providers are paid. But they'd just be a start. (Most have to do with how Medicare pays its bills, not what your insurer does.)

The fact is, cost control will be a year-by-year exercise in political will, not a single bill. We've had some practice cranking the "more out-of-pocket" lever to address rising health costs. The "pick a fight with docs and hospitals" lever may be harder for Washington to pull.

Nursing crisis looms as baby boomers age
More raises, smaller pay increases in 2010
3 perks to ask your boss for - and 9 not to