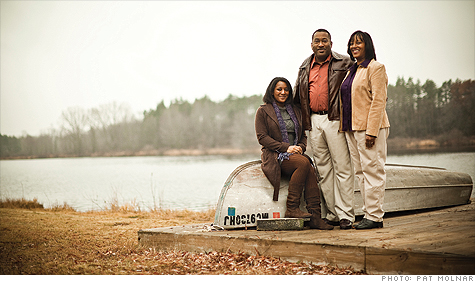 (Money Magazine) -- Kevin Ford has worked as an engineer in the Detroit auto industry for more than three decades - currently for the car company that best suits his name. His wife, Janice, is also a veteran of the field, a fellow engineer who even ran her own dealership for a few years before leaving the industry in 2005 to do part-time business development consulting.

Kevin hoped to follow her into retirement at age 55, and two years ago that seemed doable. The family had nearly $1 million saved, plus a hefty pension; they had no debt besides a $300,000 mortgage; their son, Darrell, was out of college and daughter, Kimberly, would be done in 2011.

Then came the great crash of '08. "With the losses in the market, I was certain my retirement was pushed back 10 years," says Kevin. But last year's rebound has revived his portfolio and his dream: Is it once again realistic?

It'll be difficult for Kevin to realize his dream of retiring in four years, especially given the family's future plans to build a custom home in Virginia and renovate their lake-front summer cottage in Michigan, says financial planner Sam Fawaz of Canton, Mich. Figuring in those goals, Fawaz estimates that the Fords will need $1.2 million, alongside pension and Social Security, to sustain 40 years of retirement. They currently have $882,000 with other investment accounts, and are saving $21,000 a year for retirement, including catch-up contributions allowed for people age 50 and older.

While they could hit their target by socking away another $30,000 a year until Kevin retires, that would be a stretch since they're still paying college bills for Kimberly. And while Kevin's pension - $65,000 a year at 55 - allows him to invest more aggressively than most people his age, he shouldn't go above his current 65% stock allocation, given the short time horizon and the uncertainty of his industry. All that said, some smart portfolio moves could give the Fords a shot - albeit slim - of getting to $1.2 million by the time Kevin is 55, says Fawaz.

GO ABROAD. The Fords' portfolio is heavily weighted toward U.S. large-cap stocks. But foreign stocks are expected to grow faster in coming years than their domestic counterparts, says Fawaz. Kevin and Janice should take advantage by putting 13% in small- and midcap international funds, like T. Rowe Price International Discovery (PRIDX).

DUMP COMPANY STOCK. About 8% of Kevin's 401(k) is in Ford Motor Co. (F, Fortune 500) stock. Investing in any single stock is risky, but this one's a doozy. The company is his employer; it's his pension provider, and it's in an industry that's in ill health. Kevin should scale back to less than 5%, says Fawaz.

PUT CASH TO WORK. The Fords have 35% of their portfolio in cash. Fawaz recommends moving two-thirds of it to a high-quality short-term bond fund, as such funds typically have better returns without a lot more risk for long-term investors. One good, low-cost option: Vanguard's Short-Term Federal (VSGBX) fund.

BE FLEXIBLE. If the portfolio doesn't reach $1.2 million by 2013, Kevin could delay retirement or work part-time (he'd be interested in teaching at a community college).