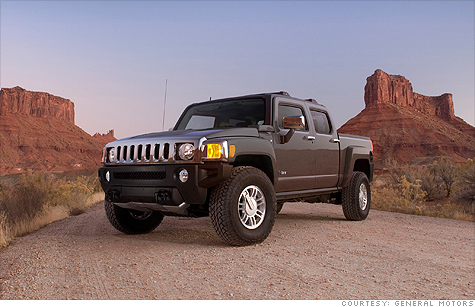 The H3 and H3T, the last two Hummer models still being made, are produced at GM's Shreveport, La., factory. The factory, which also makes the GMC Canyon and Chevrolet Colorado pick-ups, will stay open. The plant employs 1,120 people and no layoffs are planned.

6 cars worth waiting for

If you're considering a new car, keep these upcoming models, just unveiled at the Detroit Auto Show, in mind.
View photos

GM sold 325 Hummers last month and there are about 2,100 of the trucks still in dealer inventories, "enough inventory to get dealers through the point in time when the deal is done," GM spokesman Nick Richards said.

There is still no indication of when, exactly, that might happen, Richards said.

"We're assuming this happens within the early part of this year," he said.

Sales have suffered, in particular, because of consumer uncertainty about the brand's fate, said Richards, and the fact that GM has not been advertising it.

GM finalized its deal to sell 80% of the Hummer brand to Sichuan Tengzhong Heavy Industrial Machinery Co. of China in October. The Chinese government still must approve the deal.

The remaing 20% is being sold to a private investor.

Who would want to lead GM?

Dodge CEO: We can't screw up