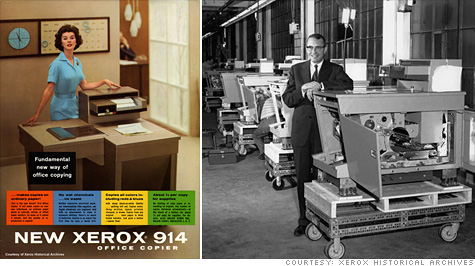 NEW YORK (Fortune) -- Long before digital tools such as listservs, e-mail blasts, and even Facebook enabled us to easily broadcast messages, photocopies were the most efficient way to distribute information to groups of all sizes.

If the boss needed to discuss a new company policy, workers got memos in their (physical) in-boxes or slipped under their office doors. Community newsletters, fliers for parties, and the oft-maligned Christmas letters in holiday cards were all made possible by the automated copying machine, which made its commercial debut 50 years ago.

"It was a democratizing technology," says Stephen P. Hoover, vice president of global software solutions for Xerox (XRX, Fortune 500). Xerox's 914 copier -- so named because it could copy a 9-by-14-inch document at a rate of seven copies per minute -- "gave people access to information and capabilities they just didn't have. It really changed how work was done."

Indeed, in announcing the 914 on September 16, 1959, Joseph C. Wilson, president of the company then known as Haloid Xerox Co. ("Haloid" was dropped in 1961), said in a news release: "Our girls [read: secretaries] love to use the 914 and have discovered many new copying jobs for it to do. For example, rather than type a complicated page full of statistics requiring nine or ten carbons, they have found it much faster to type the information on a single sheet and make copies on the 914. Thus they avoid the annoying, time- consuming job of correcting errors on nine or ten sheets separated by carbons.

"Besides, they feel great pride when their copies all look like originals."

The following year Xerox began leasing the machines, which weighed about 650 pounds and took up the space of two washing machines, for $95 a month, plus fees for supplies such as paper and toner.

Of course, people could make print copies before the 914. There were printing presses for books and newspapers, carbon paper, and even devices that used special paper or ink. Before launching the 914 the Haloid company produced a manually operated copier, the Model A, which was criticized by many as cumbersome.

Carlson's technique remains the basis for all Xerox photocopiers today. "That is an almost inconceivable achievement given the unusual pace of high-technology innovation, evolution and extinction," author David Owen noted in a 2004 Smithsonian magazine article on Carlson.

(Carlson, whose technology was so instrumental to democratization in the workplace, was a big supporter of social equality. According to Owen, the inventor gave generously to the United Negro College Fund and individual historically black colleges. He also supported Robert Maynard Hutchins' Center for the Study of Democratic Institutions.)

And while Xerox has reinvented itself many times since its brand became synonymous with copies -- it is making a big acquisition in the IT consulting area -- executives say they still glean lessons from the first automated copier introduced five decades ago.

In 1958 IBM (IBM, Fortune 500), which was considering partnering on the copier with Haloid Xerox, hired consulting firm Arthur D. Little. The A.D. Little report done for IBM concluded that the 914 had "no future in the office copying market."

The consultants got it wrong (Xerox sold more than 200,000 of the 914 before retiring the model and Fortune once called it "the most successful product ever marketed in America") largely because they talked to mailroom managers -- not the secretaries who became the main users. The moral of the story? Says Hoover: "You need to identify the right customer and listen to his [or her!] needs."