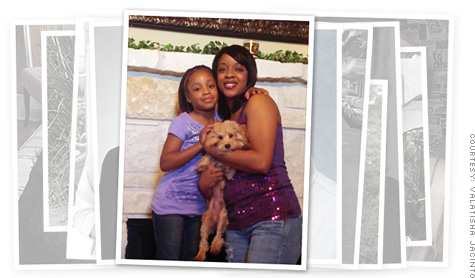 NEW YORK (CNNMoney.com) -- The road to homeownership was hard for Valatisha Jacinto.

The Waco, Texas, schoolteacher had wrecked her credit struggling to pay for college, and later trying to support herself and her daughter on a teacher's salary. She knew she wanted to buy a home, and that meant she needed to clean up her credit.

So she started attending credit-counseling classes run by NeighborWorks, a network of community-development and affordable-housing organizations. For several years she steadily worked on her debt.

That meant she was ready to act last February when President Obama signed the stimulus bill, which, among other things, authorized a refundable $8,000 tax credit for first-time homebuyers.

"My first question was, 'Do I have to pay this money back?'" she said. "When I found out I didn't, I said, 'Let me work even harder on my credit.'"

In March she bought a three-bedroom, two-bath home for $105,000. She took out a 4.9% FHA-insured 30-year loan, putting her monthly expenses, including property taxes and insurance, at just $830.

"I never thought anything that good would happen to me," she said.

More than 1.4 million Americans have filed for the tax credit, according to the IRS. In fact, the program became so popular that Congress voted in November to extend and expand it. Now, the credit expires on June 30, for contracts signed by April 30, and there is a $6,500 refund available to some current homeowners looking to buy.

Congress created the incentive as part of the stimulus bill as a way to restart home sales. Because the real estate bust helped usher in the recession in the first place, legislators argued that healing the industry's ills would lead to recovery.

"I wouldn't have been able to afford my house without it," said Rob Logan, who bought his Ypsilanti, Mich., house for $71,000 in October. "It was one of the main reasons I started looking."

Logan has already spent most of his refund rehabbing his home, a foreclosure that was in far from perfect shape. There wasn't a single appliance left and the kitchen cabinets had vanished; the wiring was old and the floors cruddy.

The 28 year old, who works for a digital entertainment licensing company, corralled friends and family into helping, but he still had to pay out for parts and for a new kitchen. ("I never want to go back to Loews again," he said.) He figures he's spent about $7,000.

"The credit helped me pay for all my appliances and some plumbing and other maintenance," Logan said. "I was able to spend more of my saved money on a 20% down payment and that has made my mortgage more affordable."

Like Logan, many homebuyers shop til they drop during their first months of ownership. They make repairs, upgrade baths and kitchens, redecorate, and buy furniture, appliances and electronics. And that helps to stimulate the economy by keeping the Wal-Marts, Home Depots, Best Buys and Ikeas humming and contractors working.

The credit has also boosted home sales, according to the National Association of Realtors. Sales soared in October and November as first-time buyers rushed to take advantage of the tax credit before the original expiration date. More than half of all transactions were from these buyers during those two months, according to NAR, compared to the usual market share of about 40%.

For Chris Saliture, a Minnesotan, the credit was vital. "That's what got me started," he said. "I knew the incentive program was going on. I may still have looked, but this had an impact on what I could afford."

The 23 year old, who curates wine Web sites, is devoting the refund to a single purpose: a spiral staircase to connect the upper and lower floors. "It's a very interesting house," said Saliture, who bought the foreclosure for just over $100,000. "It's on three levels, but there's no interior staircase."

The house started life as a circa-1885 train depot, and it was later moved from its location alongside the railroad tracks onto a nearby lot in the St. Anthony section of St. Paul. As a result, the only way to get to the top floor is a metal exterior staircase that is 12-feet wide.

There is some hope that this good thing could live on after June 30. If the housing market and the economy is not in full recovery mode by late spring, there is already discussion about Congress extending the tax credit again, according to Jaret Seiberg of Concept Capital, a Washington-based research group.

"We believe this option is likely because housing is a key issue for many Democrats and Republicans facing re-election," he wrote in a research note. "And the $10 billion cost is relatively modest given the importance of the housing sector to the economy."

Track stimulus spending
What $36 billion buys: Not much
'Stimulus got me my job': 6 success stories
A small biz boost that fizzled
How stimulus saved alternative energy